The annual service of Remembrance in Sale one again involved St Paul’s choir but this year the whole procession started and ended at the Church Hall.

The photo above shows the choir waiting for the procession to start.

At the morning Eucharist on October 26th Thomas took his final service at St Paul’s before moving on to St Mary’s in Sandbach.
During the service RSCM Choristor awards were presented to three of our choir following a successful examination earlier in the month 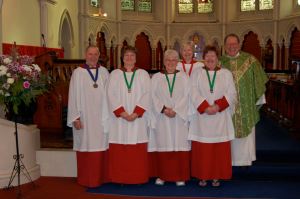 and the photo above shows the awards being proudly worn.

During the service baby Malachi was christened and after the service a Bring and Share lunch was held in the hall. Gifts were presented to Thomas & Catherine before the lunch and in return Thomas presented the Church with a newly bound service book to be used at the altar. For more photos see the slideshow below

On October 12th St Paul’s joined with Springfield School for the annual Harvest Festival Service. All gifts collected by both the school and the church have been delivered to the Mustard Tree charity in Manchester.

The service was also the last one at St Paul’s for Kathy Kirby before moving on to Timperley Parish and the photo shows Kathy with the flowers she was presented with to mark the occasion.

Once again St Paul’s opended the Church as part of the national Heritage Open Day. In addition to the usual display of memorabilia, vestments and parish records there were trips up the tower, a barbecue run by the Guides and Rangers and a performance by a professional Storyteller.

A mini sponsored cycle ride around the Sale and district parishes was done by Zack and Rodney – although of the five churches visited only two were properly open.

Parents Clair and Rob brought baby Ruby and many of their family and friends were in attendance.

The Choir and the children of the Ark presented a summer concert in the Hall on July 20th. This was followed by a strawberry tea and the photo at right shows the entertainers.

Captain Noah and his Floating Zoo

The Choir and the children of the Ark presented a summer concert in the Hall on July 20th. This was followed by a strawberry tea and the photo at right shows the entertainers. 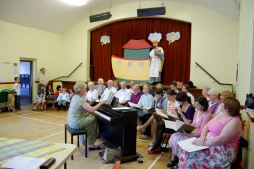 On 24th June a concert was held in St Paul’s by two talented Chinese musicians, Jiafeng Chen and Lulu Yang. in aid if the Chinese Earthquake Relief Fund. Lulu lived in the area affected by the earthquake.

On June 14th a party from St Paul’s went th Chester Cathedral to see the ordination of Kathy Kirby as a priest.

The follwing day a celebration Parish Eucharist, at which Kathy presided, was follwed by a Bring and Share lunch.

During the service the Churchwardens presented Kathy with a portable Communion Set to mark the occasion. 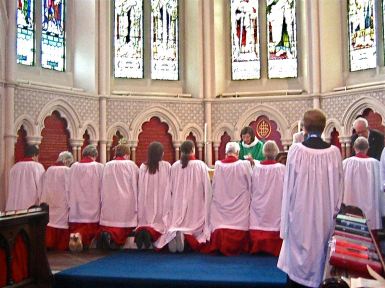 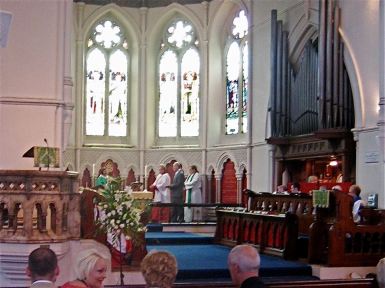 The photos  show Kathy administering the Host and receiving the gift. For more photos see the slideshow below.

On Sunday 11th May, St. Paul’s supported the “Churches Together in Sale” Whit Sunday Open Air Service held in Worthington Park. This was an Ecumenical Celebration Service for Pentecost.

The weather remained bright and sunny despite the rumbles of thunder, which could be heard close by, Cricket was rained off at Old Trafford and a Garden Party in Timperley was cancelled because of flooding, yet it remained sunny in Sale. Church Banners were displayed around the Bandstand and refreshments were provided by The Friends of Worthington Park”

The 2008 Archdeacon’s Visitation took place at St Mary’s Rostherne on May 8th.

The photos  show Hilary and Brian signing the register as our Churchwardens.

The traditional Easter Day Eucharist service began with the blessing of the Easter garden which had been decorated by members of the Ark Sunday school children. This is shown in the photo below. 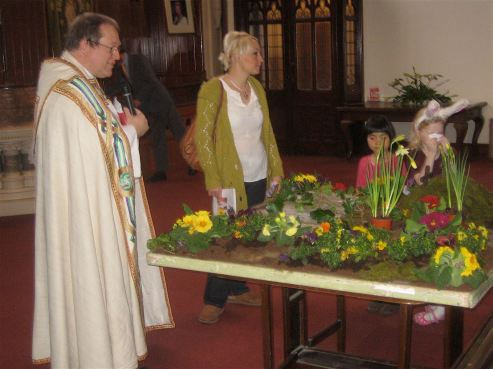 Also shown is the cross at the pulpit which was decorated by the congregation as they returned from taking the Eucharist at the altar rail.

The Palm Sunday service was preceded by a Procession of Palms from the Church Hall into the Church by the Choir and members of the congregation. 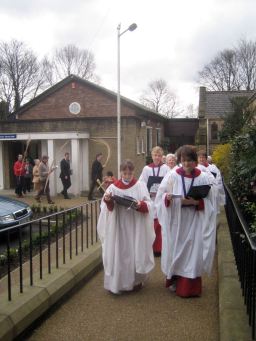 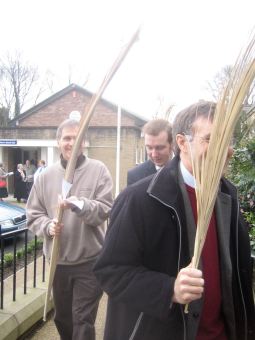 During the service the Passion story was retold with members of the congregation taking the parts of the biblical characters.

from the Christingle Service on Christmas Eve until the Candlemas Service on February 3rd.

Accessibility
We have two disabled parking spaces in the car park, a ramp for access to the Church, a hearing loop and a disabled friendly toilet. There are also two sections near the front of the Church for wheelchairs.