Christingle was a fantastic service this year with the theme being around the Selfish Giant story.

Here are some photos taken  during the service, which captures the amazing atmosphere of joy across 300+ people from across the local community. A great well done to Rev. Barbara Sharp and the Sides People who were there to ensure the service ran smoothly.

Members of St Paul’s were involved in Carol singing for charity during the run up to Christmas.
The Choir sang at Tescos in Sale to raise funds for Oxfam’s initiative to provide aid for the children of Syria.
Rob Chiton went carol singing at Wythenshawe  hospital with a group from several Churches on Christmas Eve.   He told me it was a very moving experience.

On Wednesday 7th December St Paul’s hosted a Christmas Carol Concert by Artful Voices – a group based at the Waterside in Sale. The Church was packed and the concert was so well received they are already planning a return in 2017. 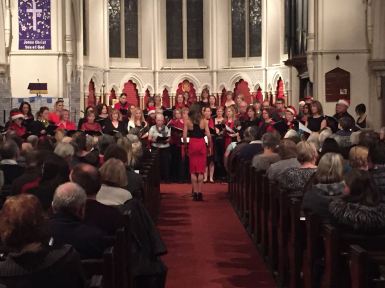 The photos above were taken on the night. For more information on the group see www.artfulplayground.co.uk

These photos show some of the decorations in the Church and Hall. 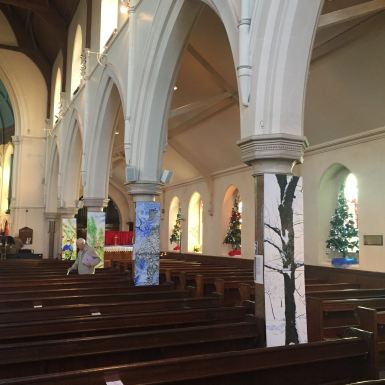 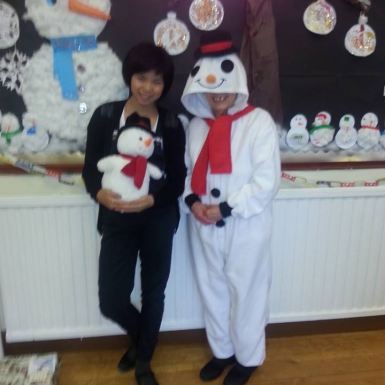 St Paul’s joined with St Joseph’s to process from the Church Hall to the Cenotaph at Sale Town Hall for the annual Remembrance Service.The Vicar and Father Stephen led the service. 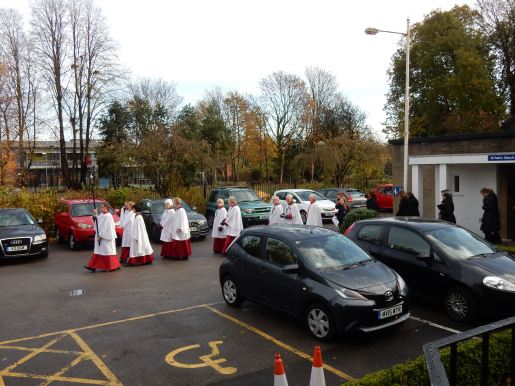 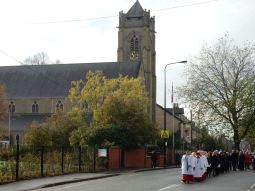 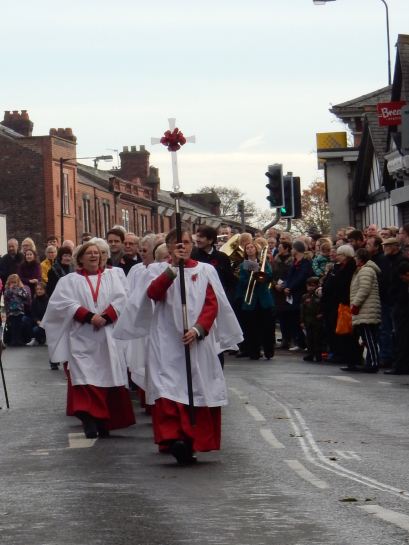 For more photos see the slideshow below.

After the morning service on October 23rd the whole congregation posed for a photograph to send to Chester as our contribution to a booklet to celebrate Bishop Peter’s 20th anniversary as Bishop of Chester.

Also Frank showed us his medal which he has just received for his part in Operation Manna in 1944, dropping supplies to starving civilians in Holland.

After the service all the kneelers were put on the pew shelves prior to a cleaning excercise. The photos below show these events. 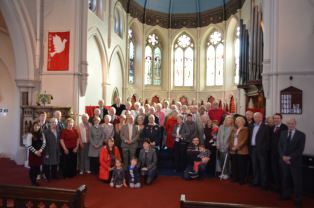 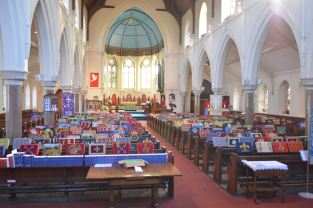 Our Harvest weekend began on Oct 8th with a hot pot and apple pie supper with Scottish dancing.

The Harvest Service on the Sunday was attended by large numbers and our Choir was joined by the Springfield Road School Choir. The Brownies were also involved. 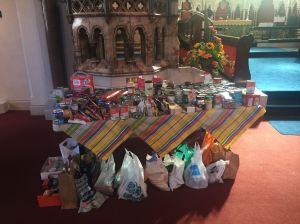 The photos here were taken on the day and show some of the gifts brought and some toys made by children in Malawi.

On September 10th St Paul’s hosted its annual Heritage Open Day.The weather was fine and the Mayor and Mayoress of Trafford paid a visit.

In addition to the usual Victorian Afternoon Teas, Tower Tours, displays of Parish Registers and old Sale, there were performances by the Cadishead Brass Band, Sale Handbell Ringers, Bollin Morris Dancers, Stories for All Ages by Helen Stewart, Punch and Judy and Magic by Uncle Chris and Harpist Sarah Paterson. James Joule also made a return visit.

A Bouncy Castle and burgers and hot dogs were available for the young and young at heart. For more photos see the slideshow below.

Commemoration for the Battle of the Somme

At the 10:00amon July 3rd a special service was held to commemorate 100 years since the start of the Battle of the Sommme.
A moving address by Lisa was given and included readings from letters written by soldiers from the battlefield. 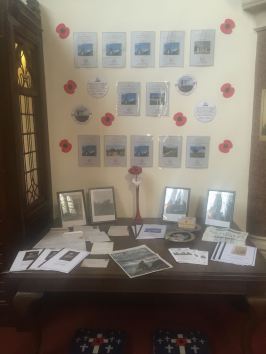 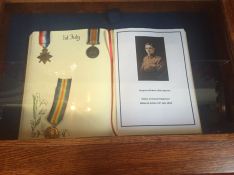 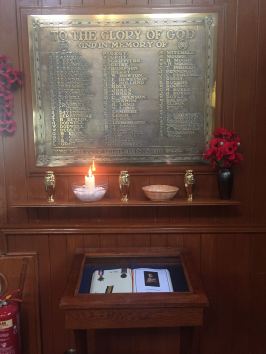 The photos here were taken on the day.

Despite a new venue, the Linden Club in Sale, the weather was still unkind to the Men’s Society bowlers. 14 members and friends took part in the competition which, at times, was held in heavy rain.
The winner was Garry Prolze and the runner-up Brian Kerridge. The third place trophy went to Frank. 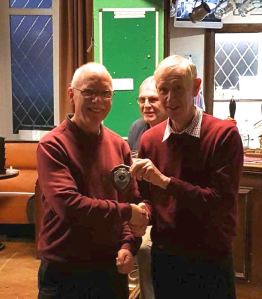 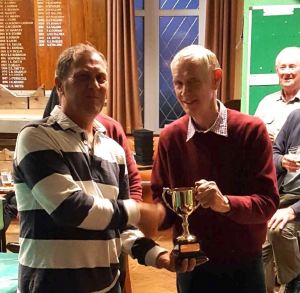 As usual a splendid buffet was provided by the Corner family and the same venue has been booked again for next year.

After a special morning service on June 12th to celebrate the Queen’s 90th Birthday there was a bring and share lunch followed by a party in the Hall and Church.

As well as tombolas, tea and cakes, games and a bouncy castle (in Church!) the Community Choir led some patriotic singing. 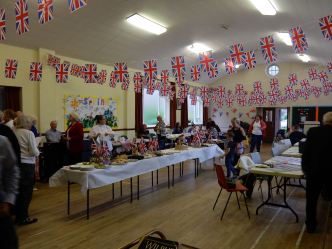 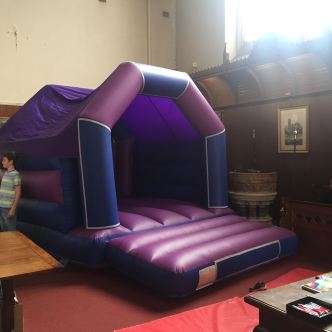 A special cake had been made which was cut by the Vicar.

On May 26th 12 members and friends from the Men’s Society visited the brand new Avro Heritage Museum at Woodford.

Our conducted tour took us through over 100 years of aviation connected with A V Roe (AVRO) from before the Wright Brothers first flight in 1903 right up to the Nimrod. 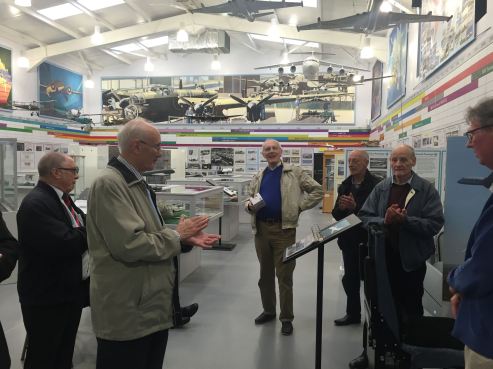 Some of the members also went into the Vulcan cockpit and Brian Walker took control of a Nimrod radar display screen.

The Annual Churches Together in Sale Pentecost service was hosted by the Avenue Methodist Church on May 15th.

Once again the weather was glorious and the photos here were taken at the event.

After the Sunday morning services on May 8th and 15th, cakes were cut in celebration of Eric and Carole’s 50th wedding anniversary and Paula’s special birthday. 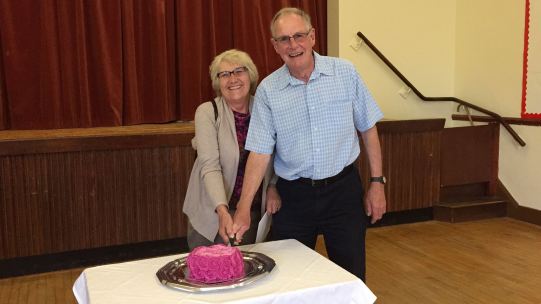 Holy week began with the procession of palms on Palm Sunday from the Churh Hall to the Church and at the end of the service the Holy Week flag was raised on the flagpole. 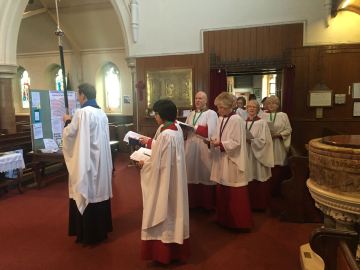 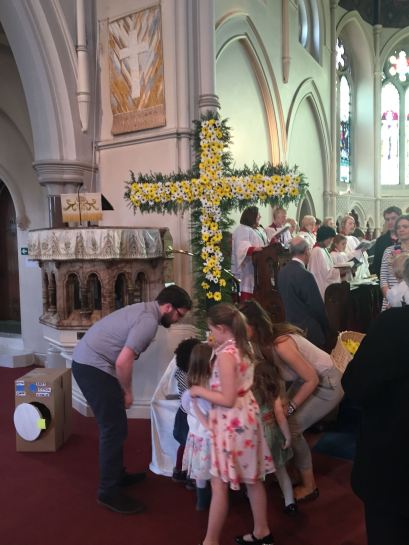 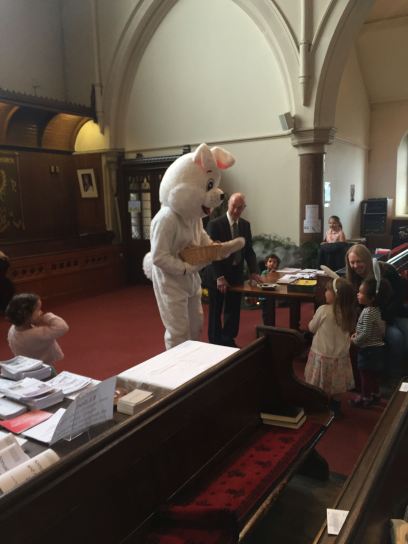 On Easter Sunday a large congregation attended and the Easter Cross was decorated before being raised on the Church wall. At the end of the service the Easter bunny gave eggs to young and old.

On Easter Monday a Fun Day was held in the Church Hall during which the refurbished Hall was officially opened by the Mayor. There was a bouncy castle, a table-top sale, an Easter Bonnet parade and a visit from the Easter bunny. For more photos see the slideshow below.

After the morning service on March 13th Eddie and Norma cut a cake in the hall to celebrate their 50th wedding anniversary.

The photo above was taken at the event.

On the afternoon of Sunday 21st Feb the Church hosted a concert to celebrate the Chinese New Year and the photo below was taken at the event.

On Feb 6th the Church Hall hosted a “Shrove Tuesday” Pancake Party. As well as a variety of pancakes those attending enjoyed a variety of games including building a structure to carry Maltesers. The photos here were taken on the night by Rachel. 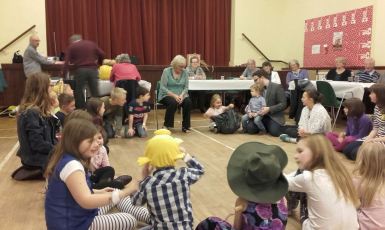 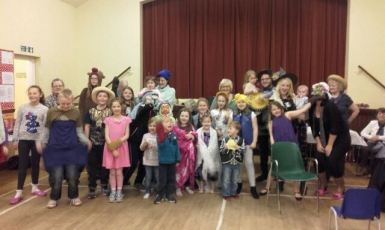 15 members and friends attended the AGM. For the first time in many tears a new member joined the committee – Clive. The meeting was followed by an excellent hot-pot supplied by the Corner family with drinks from John and Michael.

The photos here were taken during the evening.

Accessibility
We have two disabled parking spaces in the car park, a ramp for access to the Church, a hearing loop and a disabled friendly toilet. There are also two sections near the front of the Church for wheelchairs.