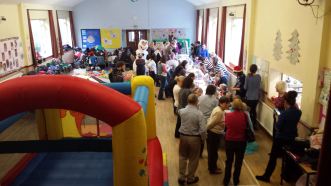 On Rembrance Suday on Nov 9th St Paul’s were once again much involved at the service at the cenotaph at Sale Town Hall.

The Choir processed to the Town Hall and the Vicar led much of the service. 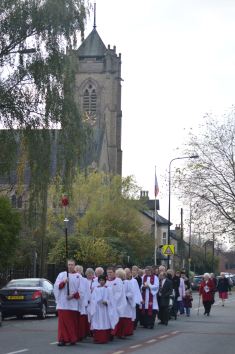 On the Sunday following Remembrance Sunday poppy wreaths were laid on the War Memorial in Church by Rosie, Jeff and Carol as shown in the photos above.

For more photos taken on Remembrance Sunday see the slideshows below.

We also had an address by members of theROC team based in Partington. For more information about their work Redeeming Our Communities see http://www.roc.uk.com.

On the weekend of 18th and 19th October we held our Harvest Hoe Down and Harvest Festival Service. The Hoe Down was very well supported and a Hot Pot Supper was followed by dancing to”Fiddlesticks”. 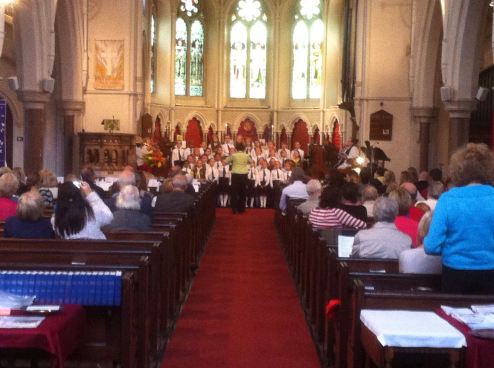 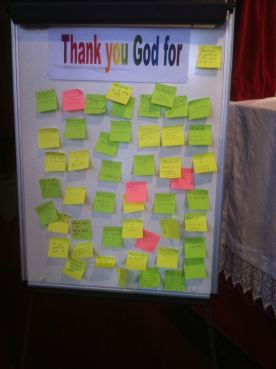 At the Sunday morning service our Choir were joind by the Springfield Primary School Choir. There were over 100 adults and 50 children at the service and around 1000 items of foodstuffs were donated for the Mustard Tree food bank. During the service everyone was encoraged to write a Thank-you postit note for display in the church and then to take a “Thank You” card to a deserving person.

The photos here were taken during the service. All the kneelers were put on the pew rails prior to a cleaning session

St Paul’s hosted the annual Heritage Open day event on September 13th. The weather was fine and the theme was Victorion with many dressed in costume.

A display in the Church centred on “A walk down School Road” over the years.

Events during the day included “STORIES FOR ALL AGES” from Professional Storyteller Helen Stewart and a The Three Fiascos (clowns).

In church there were the usual displays of wedding photos and the Parish Registers viewing area.

Music was provided on the lawns by the the Cadishead Brass Band. Once again the tours up the tower proved very popular as did the food from the barbeque and the Victorian teas in the Church Hall. 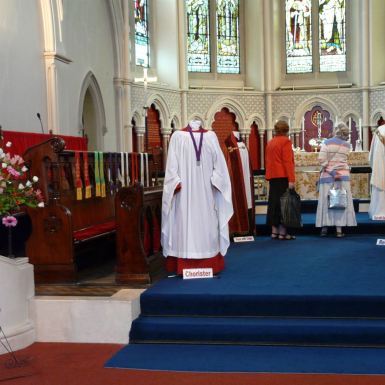 The photos above were taken during the day.

For more photos see the slideshow below.

At the regular weekly meeting of St Paul’s Community Choir on Sept 5th a cheque for £500 was presented to the Choir on behalf of the Royal Sun Alliance Community Projects Awards 2014. The presentation was made by Donald Brooks and accepted by the Vicar. the RSA Community Projects are aimed at supporting pensioners who in turn support the community.

The photos attached were taken during the presentation and show Donald Brooks handing the cheque to the Vicar.”

100th Anniversary of the start of World War 1

On 4th August Special services were held at St Paul’s to commemorate the 100th anniversary of the start of World War 1. A garden display has been made at the front of Church and a special Memorial area just inside the Church entrance. The photos below show these. 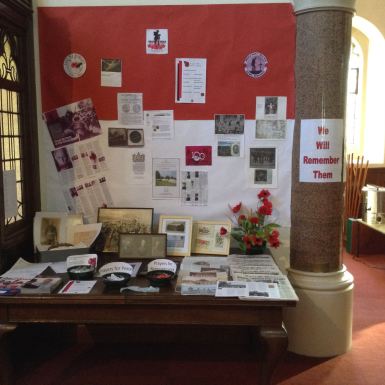 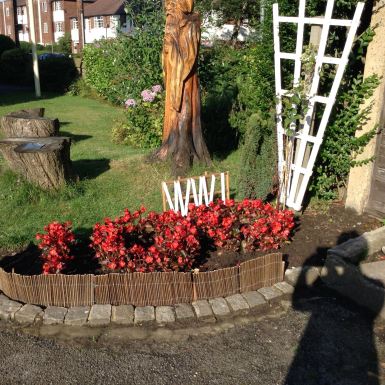 The bottom two photos were taken at the 10:00pm evening service.

The Men’s Society annual bowling match was held at the Navigation Road LMRCA Bowling Club on June 26th. Apart from a brief shower at the start the weather was kind and a good competition was held amongst 14 bowlers. The winner was Brian Kerridge and the runner-up was Garry Prolze. This year the Vicar attended and presented the trophies. A splendid spread was provided by the Corner family and this was a happy end to the season. 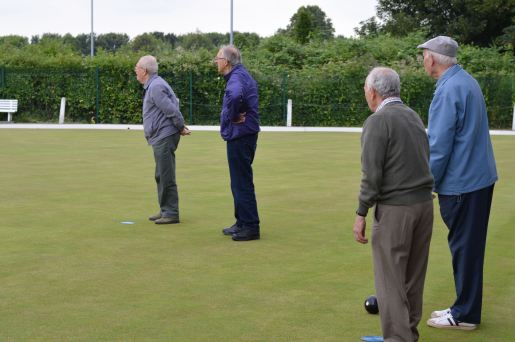 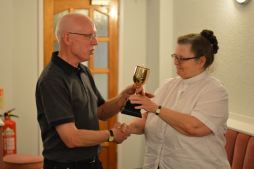 For more photos taken on the night see the slideshow below.

On 15th June the Community Choir sang at our Music Before Evensong concerts to commemorate it’s first birthday.The photos below were taken during the concert. They show the choir only , orchestra only then together for Edelweiss and solos from Joan, Rachel and Caroline 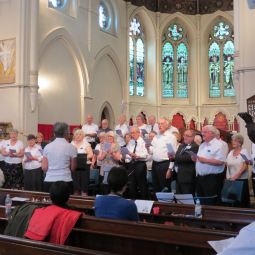 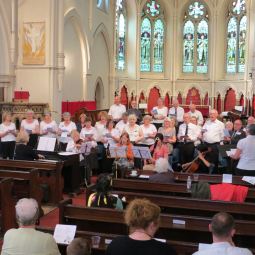 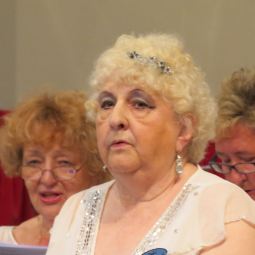 Here are Derek Richbell’s photos taken in the Friends’ Meeting House Grounds at the Churches Together Whitsunday Service on Sunday 8th June 2014. 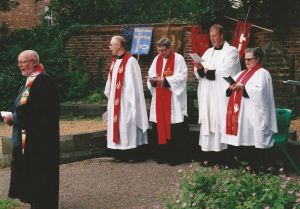 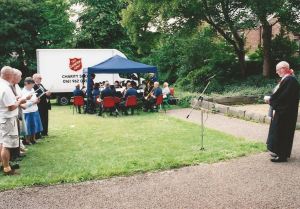 You will see some of St Paul’s on the front row of the congregation. The Salvation Army Band accompanied the hymns.

Refreshments were served after the service in the URC in Whitefield Road.

On the weekend of May 30th – June 1st we celebrated two special birthdays.

May 30th was the first birthday of our Community Choir and a cake with one candle was consumed during the session which was held in Church. 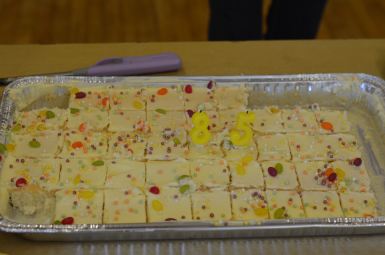 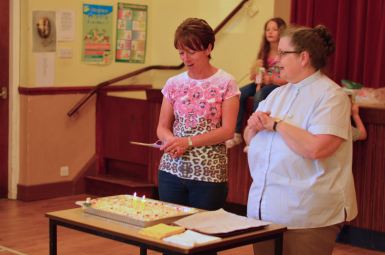 After the Sunday morning service on June 1st there was a cake in the hall to celebrate the 85th birthday of Geoffrey Richards. Unfortunately Geoffrey could not be present as he had been in hospital the previous day. He had come home but was not up to coming to the service. The photo above shows the cake and it being cut.

On the afternoon of May 14th the Tuesday Group went on a conducted tour of the new BBC Studios at Media City in Salford. The photos below were taken by Joyce.

After the morning service on May 4th Sara brought a cake in to celebrate her birthday. The photo shows Sara with the Vicar prior to cutting the cake.

Sara was recently baptised at St Paul’s and now helps with Babes & Tots.

On May 1st the Men’s Society organised a visit to Ordsall Hall in Salford. This was an open meeting so as well as the men several other members of the congregation took part. A conducted tour of the building, some of which dates back to 1600, was followed by a look at the many exhibitions and interactive displays in the building.

The photo above was taken during the visit and for more photos are shown in the slideshow below.

The Palm Sunday morning service began with a Procession of Palms from the Church Hall as can be seen in the photos below.

As a follow up to the presentation on Mothering Sunday a similar presentation was made to Carole Shakeshaft for her work with the Sunday School.

On Easter Day a good congregation with many youngsters took part in the morning service which included decorating the Easter Cross and greeting the Easter Bunny who provided chocolate eggs. The photos below were taken at the service. 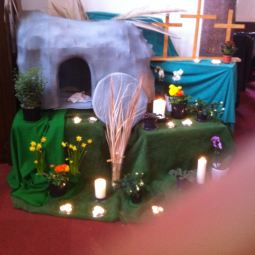 On March 29th, St Paul’s Community Choir sang in the town square for 20 minutes as part of the ‘Sale into Spring’ event. The choir was led by Penny Cunliffe, one of our helpers and the piano accompaniment had been recorded by Kevin Drury. It was a great success. Kevin took a couple of photos and these are shown below.

At the Mothering Sunday morning service Barbara instigated a tradition from the Roman church where a deserving woman is given a gift.

For her long service and dedicated work with children both in the Church and outside, the award was given to Anne Ibbotson.

She was suitably suprised and accepted gracefully.

On the evening of March 1st a Pancake & Quiz night was held in the church hall. A good turnout, including several families with children, attended and there was a steady queue for the pancakes. 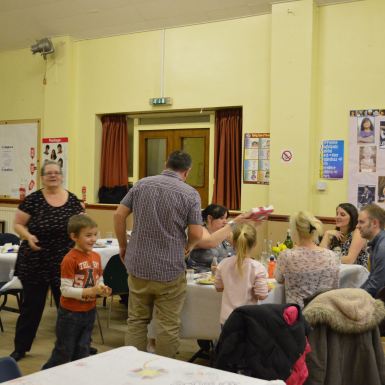 The photos here were taken on the night and include one of the winning table decorating competition.

The following morning at the 10:00am service, Sara (one of the pancake cookers) was baptised. There was also a unique event with all four regular organists, Anne, John, Kevin and Donald, occupying a choir stall as the organ was being played by our organ scholar.

On Feb 16th a special morning service was held to celebrate the power of love. As well as the St Paul’s Community Choir, the invitation was extended to parents and children recently baptised. In addition Chris Gilbert, who describes himself as an “Art and Soul” man, brought his “God Loves Me photo booth artwork”. This allowed members of the congregation to stand in it to have their photos taken.

Activities for the children involved making Valentine themed cards etc. and at the end of the service red roses were given to everyone.

The photos below were taken during the service and more can be found in the slideshow below.

For those not on Facebook if you go to the ‘F’ link at the bottom of this page you should be taken to the St Paul’s Facebook page. If asked to login or register, click on “Not Now” or ignore it. You should then be on our Facebook page and can scroll to other videos and photos. You may have to click on the sound icon to hear the audio.